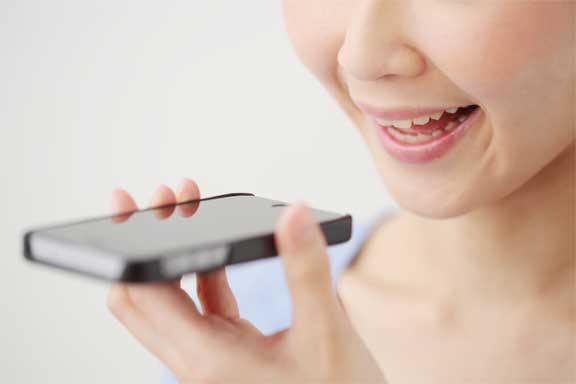 Before you start the course it is important to make a recording of your voice. After spending some time on the course, you can record yourself again and listen to how you have improved.

By recording yourself regularly, you can measure your progress.

How do you want to make the recording?

Use the Voice Memos app.

1) Go to your home screen (where you can see all the apps).
2) Touch the screen and move your finger downwards – this will bring up the search menu.
3) Type in “Voice Memos” and click the app to open it.
4) Click the red button to record and the same button to stop the recording.
5) Click “done” and save the recording.

other smartphone or tablet (including iPad)

Go to your app store and search for “free voice recorder”.

If you are using an iPad, then click the App Store icon on your home screen.

If you are using an Android phone, then click the Google Play Store icon on your home screen.

If you are using a Windows phone, then click the Store icon on your home screen.

Ensure that you save the recording once you have recorded it.

Now record yourself reading the text below. The story contains all the sounds in English.

Once upon a time there was a princess who lived at the top of a high tower in a land far, far away. Her name was Mary and she was pretty bored and tired of being there. She often moaned that she had no-one to keep her company. Luke and Emma lived in the tower as well, but they were small cats and usually refused to talk to her.

In fact, she’d been locked in this tower three years before by her father and her aunt Sarah, who loved the idea of a fairy-tale romance. They’d put a real dragon in the garden at the front of the tower. It was a huge, green, and dangerous beast. Just one look at this foul and scary creature would send most people running away! Her aunt had written to all the princes around the world (well, just the better-looking lads) to invite them to marry the woman of their dreams (the princess). But only if they could kill the bad dragon.

“Why can’t you let me do online dating like other people?” Mary sighed. But unfortunately her stupid, dull aunt wouldn’t let her.

To pass the time from dawn till dusk, Mary walked around her bedroom and ate plain food until she was full. She also progressed with her new novel, which was due out soon. It was called “How a dog feels at fault when it fails to eat meat and only eats celery for dinner”. It was a long, work-in-progress title, which didn’t make much sense, but it was what her current readers would go for. She was sure it was going to become a bestseller translated into eighty languages. It would be made into an excellent film and earn her a high salary for many years to come. Or so she hoped.

On one warm but rainy Tuesday in early winter, Prince Robert was playing in a tournament on his golf course. He was losing. Suddenly, the postman appeared with an invitation to kill the dragon and marry Princess Mary. “Cool!” exclaimed Robert, “This sounds like a fun idea. I’ll go straight away!”

He left his castle and set off in a private jet. “Hurry up!” he shouted to the pilot. “Why aren’t you going faster?” It only took an hour-and-a-half to travel the 600 miles to the royal tower. He spent the time checking his hair in the mirror. Soon the jet began its descent out of the blue sky towards the trees and mown lawn. Then Robert saw it. The figure of a horrible dragon. He started to feel nervous and apprehensive. He’d only brought along a kitchen knife to kill it.

He got out of the side of the plane and saw the dragon looking down at him strangely. There was silence as their eyes met. He’d never seen such beautiful eyes in his entire life. He stepped nearer and gazed in amazement at the dragon’s soft green skin and particularly powerful wings. At that moment, the dragon breathed in loudly. Prince Robert recoiled – worrying that it was about to breathe out fire and turn him into toast. However, all that came out the dragon’s mouth was pure smoke. It blew smoke in the shape of a heart. It was love at first sight. “Will you marry me?” he asked.

“Yes,” the dragon answered, with total commitment in its voice.

From the top of the tower, Princess Mary had been calmly watching the events unfold. She wasn’t sorry at all. “I think this would make a good story,” she said. Immediately she seized her pen and began writing.

Once you have made the recording, click here to continue with the preparation steps.